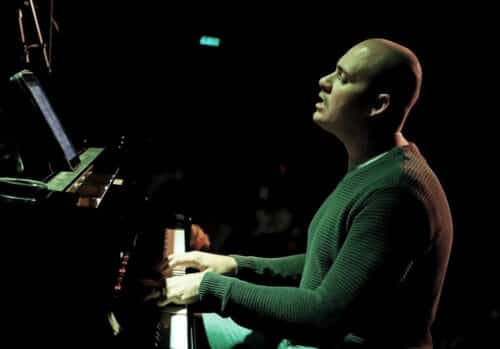 Blake Hellaby is a pianist, composer and music producer based in Cape Town, South Africa, who has gone on to gain a reputation as one of South Africa’s top pianists. As a performer he has appeared in venues across South Africa, as well as elsewhere in Africa and Europe. He has written and produced songs that have gained radio play in South Africa on both jazz and commercial radio stations.

Although not formally taught jazz at high school, he had a natural flair for jazz and was selected to be the pianist of the Standard Bank National School’s Big Band at the Grahamstown Jazz Festival (now the Makhanda Jazz Festival) in 2007.

Since completing his studies, Blake has performed extensively in both the jazz and commercial sectors, and he has served as booking agent for local music venues. His credits include gigs with many of South Africa’s top musicians, such as David Kramer, Mandisi Dyantyis, McCoy Mrubata, Ian Smith, Mike Rossi, John Hassan, Frank Paco, Buddy Wells, Vicky Sampson, Mark Fransman, Schalk Joubert, Dan Shout, Loukmaan Adams, Kevin Gibson, Tarryn Lamb. He was also booked to perform alongside Herbie Hancock at International Jazz Day on April 30, 2020, but that was cancelled due to COVID-19.

He was pianist for the National Youth Jazz Band (Grahamstown Jazz Festival, 2014), and has performed in the French Season Arts Festival run by Alliance Francais, as well as the Cape Town Jazz Festival, and The Joy of Jazz Festival. He toured with the band Nu Notes in Swaziland (2015) and in Mozambique (with Ivan Mazuze, 2016). He was pianist for the award-winning musical “King Kong, Legend of a Boxer” in both Cape Town and Johannesburg. Other international artists include numerous performances with German bass player, Martin Zenker, Swiss Alphornist, Eliana Burki. In 2017 he was pianist and musical director for US singer Yvette Norwood-Tiger, and in 2019 he played with Charles Alexander of the Berklee College of Music. In 2022 Blake was an official accompanist for the UNISA International Strings competition, accompanying international jazz guitar and bassists.